Political debate. Welcome Yahoo Message Board exiles and everybody else !!
Post Reply
5 posts • Page 1 of 1

It is obvious even to the untrained eye that Donald Trump is mentally, emotionally and psychologically unwell. Trump has shown himself to be detached from empirical reality, vengeful, a compulsive liar and a probable sexual predator. He lacks empathy, care or concern for others, and possesses utter contempt for the rule of law, the Constitution and other restrictions on his behavior. In total — as leading mental health professionals have repeatedly warned — Trump’s behavior appears to be sociopathic.

For those and many other reasons, Trump merits impeachment and removal from office. But this state of emergency is also an opportunity for hostile foreign countries (especially Russia, led by Vladimir Putin, a former KGB officer) — as well as America’s “friends” — to advance their own interests over those of the United States by manipulating a psychologically vulnerable president.

Dr. Jerrold Post is the founding director of the CIA’s Center for the Analysis of Personality and Political Behavior. As the CIA’s head psychological profiler, he served under five American presidents of both political parties. Following his 21 years of service with the CIA, Post became a professor of psychiatry, political psychology and international affairs at George Washington University.

Post is the author of 14 books. His latest (co-written with Stephanie Doucette) is “Dangerous Charisma: The Political Psychology of Donald Trump and His Followers.”

In our conversation, Post explored how Donald Trump’s “dangerous charisma” fuels his authoritarian movement and his control over his followers. He also discussed the way that Trump and his followers are tied together in a powerful pathological knot of collective need and desire, whether Trump will leave office peacefully and how Trump’s malignant narcissism informs his political decision-making and relationships with foreign leaders. Post also addressed one of the key questions of the Trump presidency: Why is he so obsessed with Barack Obama?


As is customary, this conversation has been edited for clarity and length.

You were the head psychological profiler for the CIA. How do you make sense of Donald Trump?

A famous Canadian psychoanalyst observed, "The leader is the creation of his followers." This is a very powerful relationship. Indeed, many people have been puzzled, given Donald Trump’s extremism, that the support and the dedication of his followers to him has been not hugely diminished. Trump’s rallies, in particular, show an almost frightening intensity of the power of Trump’s charisma and influence over his followers.

Donald Trump has the intangible of “star power.” He attracts attention. How does Trump use that charisma to control his public?

For a core of his base Donald Trump provides them with many things, including permission to hate. It is a striking phenomenon. In his behavior Trump is also demonstrating some of the principles which are codified in his book on leadership style. Of note, some of these themes are derived from an important mentor for him, the late Roy Cohn.

There is another important aspect to Trump’s influence over his supporters and that is the model of the “charismatic leader-follower relationship.” This is the “mirror-hungry personality,” which comes from a wounded self. The other dimension of the wounded self is an “ideal-hungry personality.” In practice this means that Trump’s core enthusiastic followers feel incomplete without a great inspirational leader to attach themselves to, someone to venerate. The mirror-hungry personality, which is Donald Trump, needs the ego-gratifying applause and roars of approval from crowds. There is a natural psychological fit between Trump and his followers.

It reflects Trump’s crying out to his crowd at his rallies and granting them permission when he says things like, "Hey, you want to smash this guy in the face, don't you? And I'll pay all legal costs." The Charlottesville hate riot was another interesting example of how Trump has positioned himself vis-à-vis the far right. Trump finds a resonance with them. He stimulates the crowd with chants such as "Lock her up!" and “Build the wall!” These all become powerful incentives for his followers to move to the extremes. It's almost as if Donald Trump is inciting these feelings. Donald Trump is connecting to feelings in his crowd — feelings that he is stimulating.

As I perceive this, Donald Trump’s supporters are in love with him. It is a deeply libidinal relationship that is common to fascist and other types of authoritarian movements. Is that analysis correct?

I totally agree with you. The danger is that such feelings, which are usually beneath the surface, are now being stimulated by Donald Trump. That is one of the reasons that there is such an inability to have civil dialogue between the right and the left in this country right now. ..

After all the lies and trumped-up charges... *STILL* your President.
Top 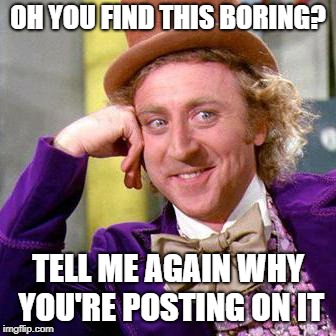 0 x
"Then I have an Article 2, where I have the right to do whatever I want as president." - Would-be-King Donny
Top

After all the lies and trumped-up charges... *STILL* your President.
Top
Post Reply
5 posts • Page 1 of 1