This is an episode of the Mark Thomas Comedy Product, from 1999.

He posed as a PR company and hired a stall at a Greek arms fair.


Whilst there he met representatives of a number of dictatorships and also a representative of the British government.
He met and brainwashed the Indonesian Major General Agus Widjojo into admitting human rights abuses on camera.

The Indonesians loved his "PR" company so much they hired him to pitch a six week training course to the Indonesian military!

Please watch it, it's hilarious but serious.

Mark Thomas is a comedian a political activist and a journalist.
He holds the Guinness book of records world record for the most protests against the Serious Organised Crime and Police Act of 2005.
The act included anti protest legislation designed to remove Brian Haw from Parliament Square, but failed to as it wasn't retrospective.

This was Brian Haw: 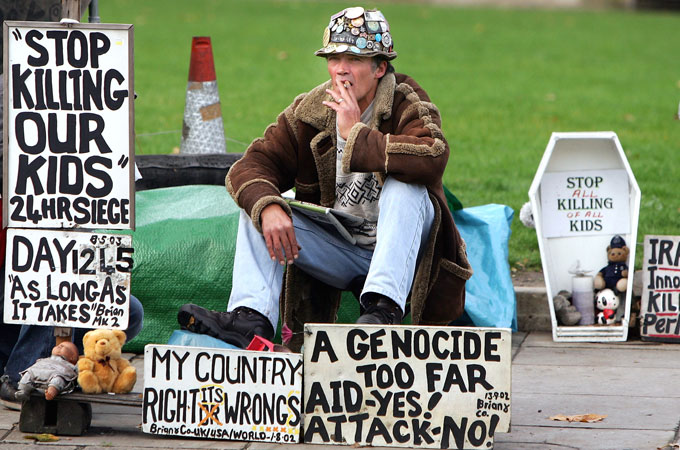 This is Dispatches, the After School Arms Club, which again was made by Mark Thomas.
I've met him personally, 3 times.
He's a lovely bloke with a good heart.


This, is where it's at.
This is where the really really nasty stuff is Antifa, the global arms industry and the oil industry.

You don't need bonkers theories about the twin towers.

And although the following isn't related to the arms industry, https://www.bbc.co.uk/news/uk-12148753
The undercover officer Mark Kennedy spied on Mark Thomas's circle of friends.

Other people in the pay of the arms industry also spied on him all because Mark had the gall to call out BAE Systems.
0 x
Top

Re: One for Antifa

Re: One for Antifa

There's a whole world of difference between 9/11 lies and the arms trade.
In Dispatches The After School Arms Club, they obtained an Israeli made stone thrower humilitated the Israeli arms company rep.
They obtained a Chinese made "sting stick" which is basically a metal club with barbs all over it used in torture, electro shock probes, thumb cuffs, actual weaponry and torture equipment, legally obtained and brokered by children to prove there were flaws in the system and the arms laws needed seriously tightening.

Previous work of his involved duping Olly Salo of Finnrappel Oy, into discussing trans shipping arms illegally to embargoed countries.
Outside the Department of Trade and Industry he phoned Olly again, sat on the back of a lorry, with speakers sharing the call with the DTI.

The man is not some conspiracy theorist.

I'm trying to show you, you've been duped and distracted into becoming harmless.
You're on a wild goose chase.

This is where it's at.

Look at what Mark has done compared to Gage.

Mark has pushed for and achieved some tightening of the law.
He's exposed dictatorships.

He got Indonesia to admit the use of British Military equipment in East Timor.

Show me what Gage has achieved other than a big fat salary and no action.
0 x
Top
Post Reply
3 posts • Page 1 of 1