All your sources are crap and like a gullible cultist, you believe everything that frauds have told you to believe.

You will not open mindedly look at any source that questions your narrative, so why should I look at another source you claim to be true ?

You're in a Dutch roll again. Stop pretending that whiskey is mystery beer.
0 x
Top

You've forgotten your own thread Antifa.

Al Qaeda had attacked the trade centre in 1993. They had tried to carry out the Bojinka plot in 1995 (there was a test bombing of an airliner that killed one man), they had bombed your embassies in Kenya and Tanzania in 1998 and they had bombed the USS Cole off the coast of Aden in 2000 with a bomb laden speedboat.

They had a track record of hitting soft targets in unexpected ways.

There was already motive for war before 9/11.

The hijacking of four airliners all of which crashed, was the straw that broke the camels back.
That was it, war.

There was no need for any building to collapse in order to have that war.
If the twin towers had remained standing, it would still have been war.

With that in mind, given that it would have been war anyway. Why take a risk of hugely invasive work requiring a large team of people, any one of whom could turn whistle blower, either by defecting to another country and going to the press abroad, or going to the press in your own country ?

There is no logical reason to.
Therefore it didn't happen the way you claim.

WTC7 was not a target. There was no logical reason to rig it for collapse, especially not on "that" day with cameras rolling and microphones on.

Therefore it did not happen the way you claim.
IT was hit by WTC1, it had unfought fires burning away for seven hours taking their toll on the structure which is why it failed.
It also had unusually wide load distribution due to an electrical substation with a load transfer structure straddling the substation.

There were phone calls made from the planes, people had been stabbed, there was mace in first class.
WTC7 collapsing does not explain Betty Ong's phone call (or any of the others), conspiracy theories distract from it, they does not explain it.

It did not happen the way you claim.
2 x
Two wrongs don't make a right.
Top

It's insane for me to continue going around in circles with someone who doesn't care about evidence. It's a lot more fun wondering when Americans will wake up and revolt against our terrorist government. The bailouts may push them over the edge.
0 x
Top

Oh I care about evidence but you haven't got any.

What you are doing is lying and hoping to be believed.
Meanwhile there were scores of eyewitnesses including on the planes.

People made calls from the planes using airphones.
That's an absolute fact. People phoned their loved ones including Peter Hanson who phoned his father Lee from United 175.

I already showed you the recording American Airlines made when Betty Ong called them from flight 11.
Not even "super thermite" can stab people on a jet. Your arguments are lies.

The whole reason for hijacking the planes is that WTC security had been improved dramatically since 1993, Rick Rescorla saw to that. No way could anyone bomb the trade centre again except by air. He knew that, they knew that.

He tried to get airport security and airline security improved.
He failed.

On the day, Rick Rescorla saved thousands of lives at the cost of his own.
1 x
Two wrongs don't make a right.
Top

"Oh I care about evidence but you haven't got any."

How do you explain the nano-thermite found throughout the WTC dust? Do you know who makes nano-thermite? I'm providing you with peer-reviewed papers and you reply with NIST bullcrap.

Do you really believe NIST is going to admit to the evidence of military grade nano-thermite?
Spend a few years reading about 7th grade physics and you may learn there's only one way to get a steel frame building to fall symmetrically. It's a waste of my time until you at least have a basic understanding of aerodynamics.
0 x
Top 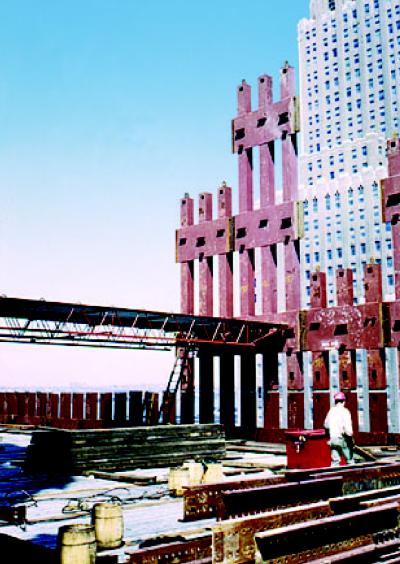 See how those spandrels are red ? That's the stuff.
It's not nano thermite it's the China clay based anti corrosion coating and that's what the dust was, not "un-reacted thermite".

It was independently tested, Ryan Mackey of NASA paid for independent tests to be carried out by a neutral scientist.
The conspiracy theorists were handed samples over for analysis Ryan Mackey obtained samples from the same source. 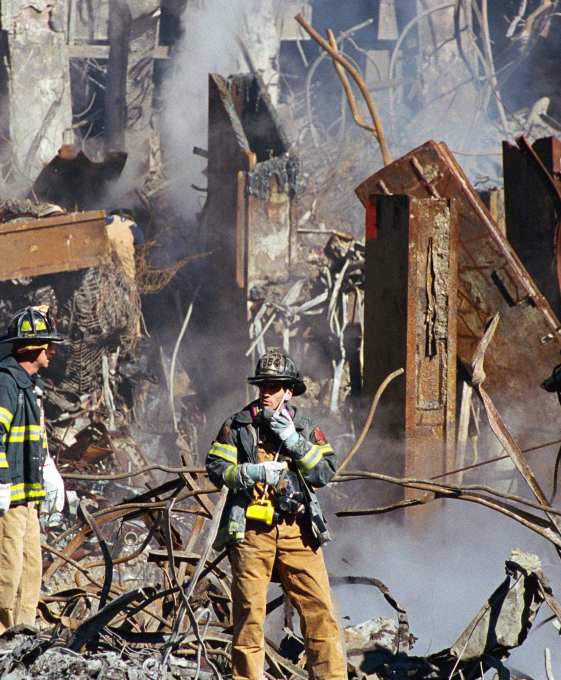 They claim this was "cut with thermite" except it wasn't, photographs prove it was cut with oxy acetylene during the clean up some time after collapse. 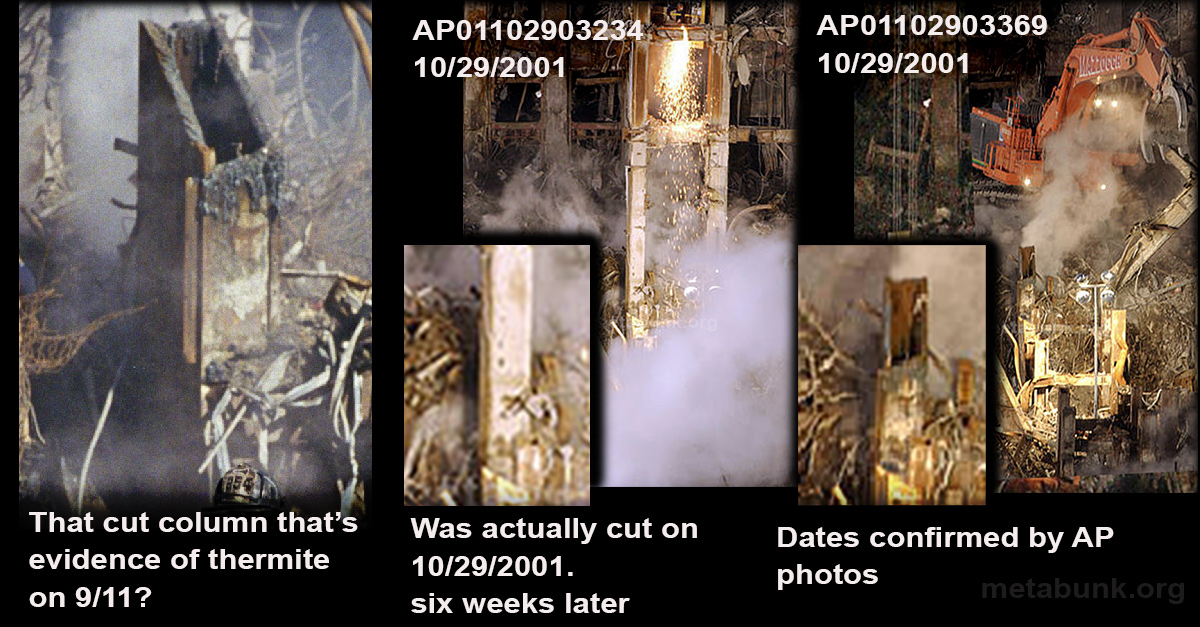 That is the same column still standing, date of photo 29th October 2001 12am, photograph was taken by David Karp.

Unsupported loads fall.
Falling gives acceleration.
Acceleration gives additional force.
The structure below was not strong enough to withstand that additional force, resistance was able to slow it down a little, but that resistive force flung spandrels out sideways. Hence the collapses were top down and were not symmetrical.

I cannot give you the exact mass of the upper block or the velocity at which it impacted the floors below, I'm sorry I cannot be more exact.
But smashing airliners into skyscrapers meant there was no need to rig skyscrapers.
Why else have airliners hijacked ? 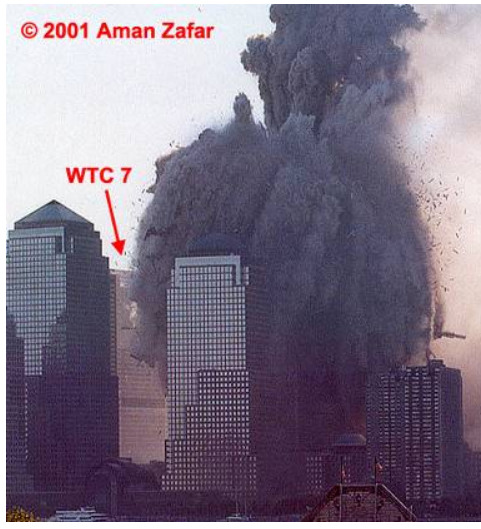 There were phone calls from the airliners some of which were recorded.


Air traffic transmissions were recorded, the hijackers voices were broadcast over the radio.

In the ATC recordings they refer to guard.

If you're wondering what "guard" is, it's an emergency frequency (121.5mhz) for use of all aircraft.
Air traffic controllers were trying to find out what was happening.
You can tell from the ATC records, this was real.

Even if no building had collapsed that day, it would still have been war, so why go to extremely risky lengths of rigging buildings which thousands of people worked in? The controlled demolition argument makes no sense at all and never did.
1 x
Two wrongs don't make a right.
Top

Do you know what an electron microscope is, Shred? We've been over this a half dozen times but you keep forgetting that it's easy to tell the difference between a paint chip and nano-thermite. There's a lot of science deniers on this site but you take the cake.
0 x
Top

Yes I know what an ELECTRON microscope is and I know that independent analysis with one paid for by Ryan Mackey to a neutral scientist confirmed that it is indeed China clay, not nano thermite as the conspiracy theorists pretended.

If the conspiracy theorists had gone to a peer reviewed science journal with their theories they'd have been the laughing stock which is why they invented their "Journal of 911 studies" instead. And that is as much as science journal, as the Beano or the Dandy.

One day you'll realise, these people are con artists.
They sell books, dvds and fantasy to the gullible. And 18 years 7 months 28 days at present, not one whistleblower has come forwards.
Nobody has "confessed" to planting demolition charges. Nobody has been taken to court by these frauds or anything.

The only people to confess to anything were the terrorists who planned it.

Rigging the buildings would have increased the conspicuity of any conspiracy, therefore there was no logical reason to attempt to.

Besides, people were knifed in the planes. Demolition charges cannot knife a pilot.
But terrorists can.

The terrorists who hijacked those planes, killing everyone on board including themselves.

Now think objectively, who would crash their own economy and destroy a large part of their military's command centre to justify a war they already had justification for since the embassy bombings and USS Cole bombing ? There was no need for a US government to stage such a thing, therefore it was terrorists.

Science is dependent on government grants. Any scientist with the courage to write or review the facts of 911 is committing career suicide. You NIST boys are a bunch of toady hacks.
0 x
Top
Post Reply
807 posts